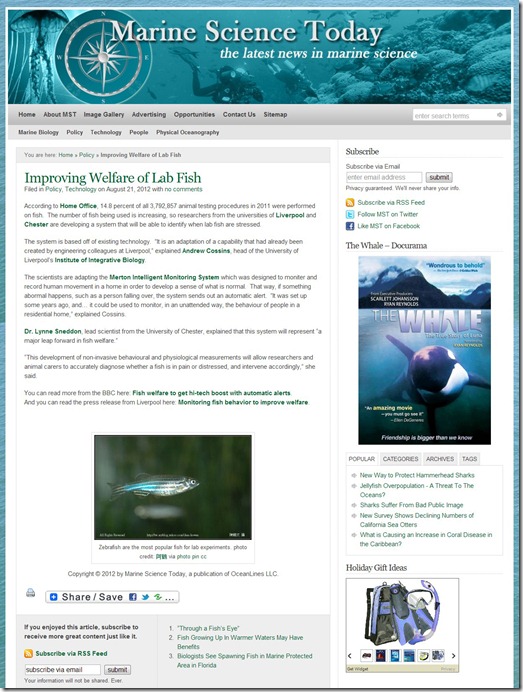 Filed in Policy, Technology on August 21, 2012 with no comments

According to Home Office, 14.8 percent of all 3,792,857 animal testing procedures in 2011 were performed on fish.  The number of fish being used is increasing, so researchers from the universities of Liverpool and Chester are developing a system that will be able to identify when lab fish are stressed.

The system is based off of existing technology.  ”It is an adaptation of a capability that had already been created by engineering colleagues at Liverpool,” explained Andrew Cossins, head of the University of Liverpool’s Institute of Integrative Biology.

The scientists are adapting the Merton Intelligent Monitoring System which was designed to moniter and record human movement in a home in order to develop a sense of what is normal.  That way, if something abormal happens, such as a person falling over, the system sends out an automatic alert.  ”It was set up some years ago, and… it could be used to monitor, in an unattended way, the behaviour of people in a residential home,” explained Cossins.

Dr. Lynne Sneddon, lead scientist from the University of Chester, explained that this system will represent “a major leap forward in fish welfare.”

“This development of non-invasive behavioural and physiological measurements will allow researchers and animal carers to accurately diagnose whether a fish is in pain or distressed, and intervene accordingly,” she said.

You can read more from the BBC here:Fish welfare to get hi-tech boost with automatic alerts.
And you can read the press release from Liverpool here: Monitoring fish behavior to improve welfare. 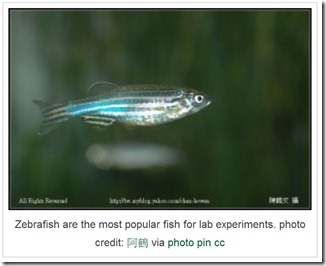 Copyright © 2012 by Marine Science Today, a publication of OceanLines LLC. 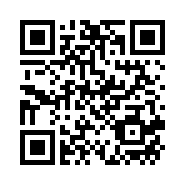